The minimum order for chicks to be shipped is currently 8 chicks, (on farm pickup has no minimum) this can be a combination of any breeds available. 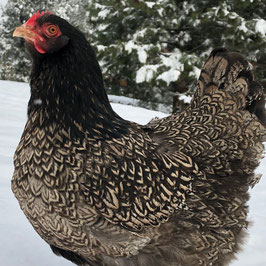 This early 18th century Dutch breed is perhaps best known for having one of the most striking plumage's of any bird in the world. The Barnevelder was developed in the town of Barneveld, Holland. An Asian breed, known as a Langash, was introduced into the local fowl to breed the Barnevelder. The Double Laced pattern originated in England around 1920, and is found only on the hens. The Dutch farmers that developed the breed were looking for a hardy, and proficient egg laying hen. The standard for Barnevelder eggs are a large, dark brown, but the Silver Double Laced Barnevelder, the rarest of the breed, is a few shades lighter in the egg coloring. To increase egg production they were bred to not be very broody. That goal succeed, as a Barnevelder hen will lay around 200 eggs per year.  With a large, meaty carcass, a friendly demeanor, and great egg production, the Barnevelder is a wonderful dual purpose breed. All of our flock of Silver Double Laced Barnevelders were sourced directly from Greenfire Farm.